What Tangled Webs We Weave

With some sticky notes, colored rubber bands, tape and patience, you too can create a medieval family tree. This one has been a work in progress for a while now. I thought I was finished earlier this week until I realized I misplaced Anne Neville (now who would do that?) which threw the entire tree out of alignment. The picture below now shows everyone in their proper spot.
﻿ 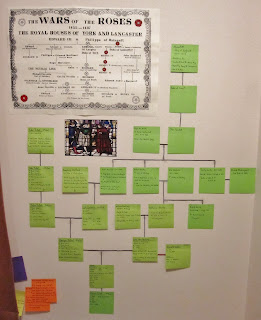 At the top we have Edward III and one of his many children, John of Gaunt. It is through his descendents that we get the dynastic struggle known as the Wars of the Roses. One of his sons went on to become Duke of York, the other, Duke of Lancaster. The latter takes the throne by force from King Richard II, son of another brother. Two generations later, the Yorkists object to the failing rule of Henry IV's grandson. There you have it.
Now then, my disseration is on George Talbot the 4th Earl of Shrewsbury. This tree was created to understand his past. The Talbots are the family on the left, relatively secluded from the murky web that comprises of the Staffords, Nevilles and Beauforts. George is the third green square from the bottom up (left). His family then goes through the 3rd, 2nd and 1st Earls of Shrewsbury. Each Earl was quite successful and earned family honors along the way. The First was a famous general during the Hundred Years War with France. The Second died protecting Henry VI at Northampton during the Wars of the Roses. The Third died young (25) but still managed to marry a high status woman (Lady Catherine Stafford).
The point to all of this is to show the extensive inter-relationships of families which George was born in to. For example, there were both Yorkists and Lancastrians. George had to tread carefully to avoid banishment or execution. He was a Lancastrian yet had to fight for the Yorkists at Bosworth. He was forgiven by the new king Henry VII and promptly fought for him at Stoke in 1487. Even then, family alliances meant that George could be pulled down as an accomplice if any of his kin or friends went rogue. How did he survive when his morals were on the line? What did he do when his honor was questioned? These are the questions I hope to answer in the following months...    ﻿