Broken Dreams So Grand: The Death Of Charles XII

November 30th, 1718 marks the death of Charles XII, King of Sweden. Having spent the majority of his 36 years at war, it is fitting that he died as he lived: amongst his troops. The manner of his death is still unknown today. Was he killed by a lucky enemy bullet or was there sinister treason from within? 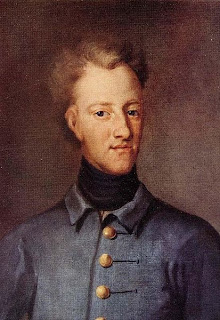 Let us quickly look at the accession of Charles XII, also known as Carolus Rex, through the music of Sabaton. It was the release of this song which prompted my interest in the king.

Charles ascended to the throne at the age of 15 in 1697. Quite learned and resourceful, the young king quickly grew into his role. His young age and supposed inexperience forced the hand of Sweden's enemies, most notably Denmark-Norway and Russia, to attack the Empire. This initiated the Great Northern War which was fought from 1700 to 1721.

With Sweden already being a strong military power, Charles further reformed its military and ensured rigid discipline. The Caroleans also held a strong faith in God which became synonymous with their cause. Lastly, the king developed an aura of invincibility that many under him came to believe. Leading from the front, Charles wore the uniform of a common soldier, forgoing more ostentatious garb of the time. In his early campaigns, the king would be in the heart of the battle and always walk away unharmed. In relatively short time, the triple alliance which attacked Sweden was mostly defeated leaving only Russia. Charles led Sweden to numerous victories including the Battle of Narva where Russia lost over 10,000 men to Sweden's 667.
As history has proven time and time again, Russia's manpower would be the deciding factor. The Battle of Poltava was the turning point which historians mark as Russia's rise to a European power. His army decimated, Charles fled to Turkey and eventually returned to Sweden.

Following successive campaigns against Norway, Charles besieged an enemy fortress at Fredrikshald in late 1718. Per his usual tendencies, Charles personally inspected the trenches to bolster the moral of his troops. As he stood on the parapet, arms crossed and resting on the trench lip, a shot rang out and the king's head slumped into his coat. A contemporary source describes the shot hitting the king as sounding similar to "an open hand striking hard against one's thigh". Charles died instantly. With him died the Swedish Empire and the absolute monarchy for both dissolved in the following years.

Once again, the story continues in the lyrics...

Still debated today, one question remains: who killed the king? The trenches were indeed close enough to the fortress for enemy snipers to pick off the besiegers. Moral amongst the Swedish troops was low as men were dying on a daily basis to sniper fire as they dug closer and closer. But based on the trench alignment and the king's own body position, an enemy bullet hitting the skull as it did has extreme odds. The more accepted theory is that Charles was killed from within. Perhaps it came from a common soldier who was tired of the constant warfare during the king's reign. Or, perhaps, the conspiracy stretched to Charles's brother-in-law Fredrick who became the next king.
The german medic who worked on the king's body was disturbed by a dream in which Charles was reanimated and told him "es kam einer gekrochen" (one came crawling). This hints at the conspiracy within. The discussion continues...

Charles was buried at Riddarholmen Church in Stockholm. In 1917, his body was examined and one can find pictures of the autopsy online. I myself plan to visit Stockholm next April and see the King's effects first hand. The Livrustkammern still displays the uniform he wore the night of his death, his white gloves stained by blood as a reminder of the demands of war.
Posted by Michael at 02:55