The culmination of the university's history program is a 15,000 word dissertation on the topic of our choice. Now that we've had some classes to discuss what such a paper entails, I feel much better about it than when I accepted my placement.
Having picked my topic, title and supervisor, I am even more confident of future success.
Time for the big reveal!

Topic:
It's Tudor based. Well duh. I'm sure you will be surprised to hear that there is no Anne Boleyn...anywhere. I admit that my original intention was to write about her in some capacity, but I quickly realized that a) there's too much information out there to process in a short time, b) she's been written on extensively (Who will top Ives? Seriously) and c) everyone and their mother is an arm-chair historian on her life.
I wanted something different, something that lacks extensive secondary sources which leaves the path open for a potential book should I so choose. As I toured the city of Sheffield and became familiar with its history, I came across an important character. Unlike Anne, there is little mystery about his personal life. Unlike Anne, he lived to be 70 (In early Tudor times nonetheless). And unlike Anne, he managed to survive many challenges where his allegiance would be tested... 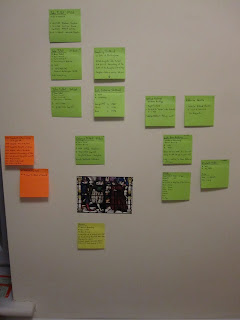 Primary research tactic: plaster the walls in sticky notes. Just getting started.
His name is George Talbot and he is the 4th Earl of Shrewsbury. Born into a Lancastrian family who suffered loss during the Wars of the Roses, he married a lady with family ties to prominent Yorkist figureheads. He fought for Henry VII at Stoke and proceeded to quickly rise through the ranks at court, becoming a privy councillor in 1512 and Lord Steward of Henry VIII's household. All the while, he had to tend to his own estates in the north and consolidate his growing power. He survived the Wars of the Roses, the treason of Buckingham, the fall of Wolsey, Henry's "Great Matter" and the Pilgrimage of Grace. 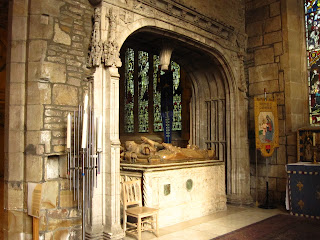 The memorial of the 4th Earl and his two wives. He built the family chapel starting in 1520. Now known as the Shrewsbury Chapel at Sheffield Cathedral, the vault below holds the remains of several earls and family members.
Title:
Cunning Loyalty: The success of George Talbot in an era of Tudor faction

Supervisor:
Each student must have a professor supervising their dissertation. Obviously they need to be an expert in their field in order to provide assistance and advice. With my luck, I managed to find Dr. Catherine Fletcher. She is an early 16th century expert particularly on diplomacy in Italy. Her book "The Divorce of Henry VIII" looks at the king's matter from the eyes of his papal ambassador. I actually have two copies because they changed the title and I got confused!
In another sign that it really is a small world afterall, my friend Natalie actually interviewed Dr. Fletcher for her wonderful website Onthetudortrail.com. You can see it HERE! 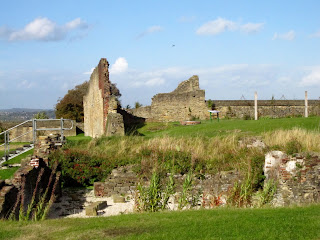 The ruins of Manor Lodge. This was the home built by the 4th Early about 2 miles up hill from Sheffield Castle. A magnificent site to visit if you love ruins.
Posted by Michael at 02:39