Today marks the 900th anniversary of the founding of the Knights Hospitaller. Also known as the Knights of St. John, the Hospitallers were a military order founded in the Holy Land after the First Crusade. Pope Paschal II confirmed the founding via a papal bull in 1113. 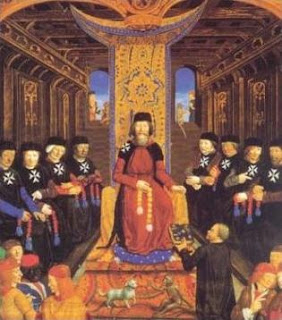 The order has its roots in the founding of a hospital, dedicated to St. John, in Jerusalem in 1023. Only after the First Crusade did officials realize that the ever growing number of pilgrims needed safe passage to the capital. To stave off muslim raids on the caravans, several military orders came into existence. The most notable are the Knights Templar. These orders consisted of warrior monks dedicated to both God and war. In the case of the Hospitallers, they were also caregivers, taking in the sick and wounded. It is primarily for this reason that the Hospitallers survived longer than any of the other orders. With the fall of the Crusader States and Acre in 1291, the justification for military orders dropped. Many orders folded into one another (Such as the Sword Brothers incorporation into the Teutonic Knights) and the fall of the Templars to a wiley king is well documented.

To avoid mix-up, a Knight Hospitaller was identified by a black tunic and white cross. The Knights Templar wore a white tunic and a red cross (their sergeants were black with a red cross).

The Hospitallers managed to carve a niche for themselves at Rhodes where they continued to harass the Turks in daring sea raids. Eventually, Rhodes fell to the Ottoman Turks in 1522. The Knights retreated to Malta only to defend it in what is now called "The Great Siege of 1565". It is at Malta where the Hospitallers are reborn and become the Knights of Malta. Their legacy is imprinted on the island to this day. Ironically, the Knights fell not to a muslim force, but a christian one in the form of Napoleon's French army.

It was then that the Knights lost their military purpose and devoted themselves full time to hospital work. Still, their current name reminds us of their past lineage: "The Sovereign Military Order of Malta". There are cadet branches everywhere such at the Malteser, the Order of St. John of Jerusalem, Johanniter and St. John Ambulance. 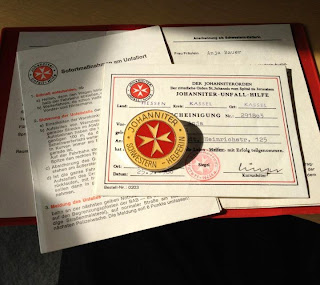 In England, the Knights Hospitaller had a dominating presence up until Henry VIII's dissolution of the monestaries. They had members who fought for England in various battles and were the original owners of Hampton Court (the property and an early building complex). You can still find them in London in the suburb of Clerkenwell where they have a musem and the remains of their priory. The Tudor period gatehouse is still there and contains many great artifacts of their long history. If you show up for a tour, you'll be taken into the order's crypt which lies buried across the street and holds the bodies of its last English priors.

I, for one, have Malta on my list of places to visit. You cannot miss the influence of the order anywhere on the island! I would also love to visit Krak de Chevalliers, the most iconic crusader castle still in existance. Unfortunately, it resides in Syria. Antioch, Acre and Jerusalem are all on my list as well.
Posted by Michael at 04:44