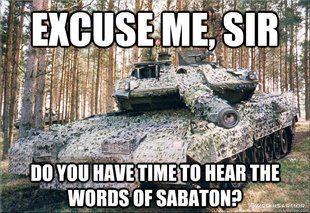 For the people who have been following this blog from the beginning (so maybe three of you), you may have noticed that I occassionally supplement my posts with videos by a band called Sabaton. I thought I'd use a post to talk about them a bit more since they are basically heavy-metal-history.

First off, the name "Sabaton" sounds awesome! Truly metal! Of course, when you find out what it really is, you might do a double-take. A sabaton is the flexible plating that covers the top part of the foot in a suit of armor. No, really! 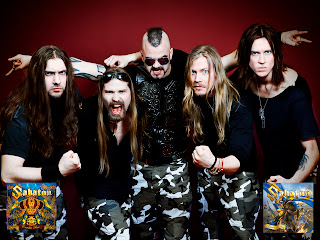 Sabaton is a heavy metal/ power metal band from Falun, Sweden. They are constantly growing in popularity, especially in Europe, due to their awesome shows and the content of their music. When you open for Judas Priest and Iron Maiden, you are doing something right. Anyways, Sabaton uses the history of warfare for their lyrical content. Battles, characters and themes throughout time are meticulously researched and then incorporated into song.

Part of their popularity stems from the fact that they cover the history of many countries. The Polish government has given the band several awards because of their songs "40:1" and "Uprising" depicting the heroism of the Polish during WWII. Germany, Greece, Sweden, Norway, England, Israel, US, Russia and others all get their time in the sun. I have included snapshots of each song and its corresponding context below (thanks to Wikipedia):

The Art of War

I know of at least one example on youtube where a history teacher incorporates Sabaton's songs with archival footage and text and then presents the videos to his students. I've been thinking of doing the same:

Who loves Sabaton? I do! 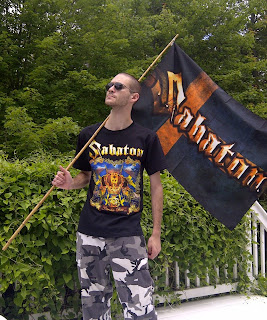 Bringing your national flag to Sabaton concerts is encouraged.﻿ 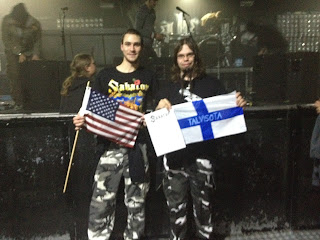