Much Cooler Than State Quarters

If you get your hands on British coinage from the past few years, you'll be able to piece together the shield of Britan's Royal Coat of Arms. The three passant guardant lions of England are represented twice. In heraldry, the positioning of animals is called an "attitude". In this case, passant means striding forward while guardant means the beast is facing the viewer. Up next is the rampant (rearing on hind legs) lion of Scotland surrounded by a two layered tressure flory-counterflory border. Last but not least is the harp which represents Northern Ireland. 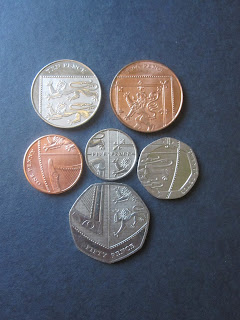 Heraldry played its most important role in the middle ages and early modern period as it was one of the primary ways to identify dynastic houses and loyalties. With the Wars of the Roses, battles were fought under countless banners and troops would wear badges and colors to show allegiance to their respective lords. To keep order, King Richard III created the Royal College of Arms who are tasked with validating proper heraldry for families, creating new arms and making sure all are correctly kept.

I may or may not have two books on heraldry because of how awesome it is.
Posted by Michael at 04:30