A Palace For Kings...Of The Scottish Variety

Just on the other end of the Royal Mile in Edinburgh lies Holyrood Palace. Built in the early 1500s, the palace served as the official seat of the Scottish monarch at various intervals of history. Just like the castle, it survived rebellion, unification and wars.
My tour of abbeys continues as well. Situated right next to the palace is Holyrood Abbey. All that remains is the nave with its exposure to the skies.

The full entry can be found on the right under UK Tour: Holyrood Palace & Abbey. 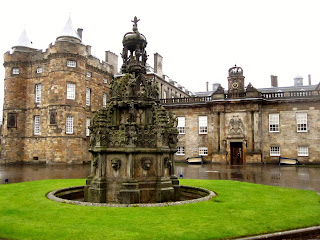