"To their own shore came the World War"
The Sheffield Blitz
On the clear nights of December 12 and 15, 1940, the German Luftwaffe bombed Sheffield. Tens of thousands of high explosives and incindiaries fell on the city in what became known as the Sheffield Blitz. Over 660 people were killed with thousands wounded or displaced. Entire sections around Fargate and Fitzalan Square were devastated including the Cathedral which lost its west end. 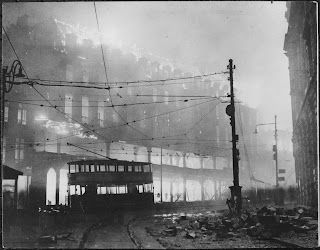 City Center. (photo courtesy of wikipedia commons)﻿
Sheffield was an obvious target due to the number of metal forges in and around the city. It was the only city to have certain production machines capable of building parts for Spitfire engines. With Operation Sea Lion and the Battle for Britain, Germany realized Sheffield was an important strategic target. Mot of the forges were hit with many knocked out of commission for a period of time. None seemed to be completely eradicated.
If one looks closely, the scars of the Blitz can still be seen to this day. The best and easiest-to-find example is City Hall: 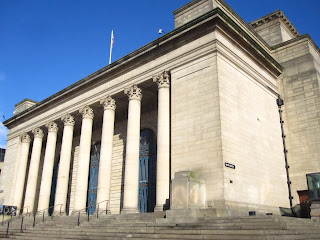 City Hall- a venue for concerts, shows and graduations. 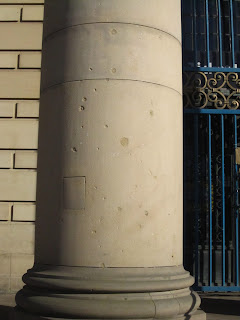 Shrapnel damage can be seen on every column. 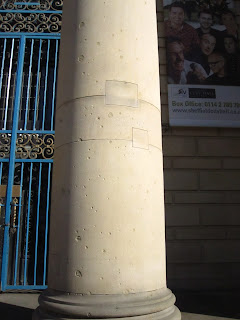 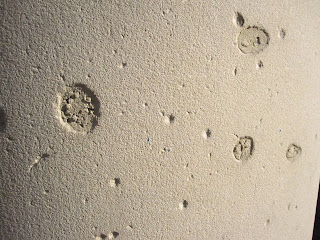 King George VI and Winston Churchill both visited Sheffield after the Blitz to bolster morale. I don't believe Sheffield was targeted any further during the war.
My own grandfather was an officer in the Luftwaffe, but he served in their ground forces fighting primarily on the south-east and eastern fronts.
﻿
Posted by Michael at 15:22