A page where I will be highlighting all the tasty foodstuffs that I try. Particularly bad ones will be noted too! 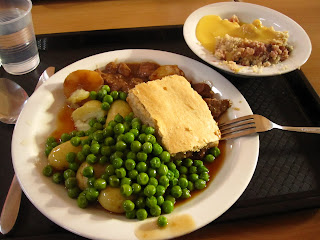 9/19/12: This just in...Young's Double Chocolate Stout is delicious! Pair it with 85% dark chocolate you have a dream desert!

9/20/12: Had my first "British High Tea" today at the Leopold Hotel in downtown Sheffield. This formal tea time includes black tea or coffee along with fresh, warm scones that are to be spread with strawberry jam and clotted cream. Fantastic I must say. Of course, I have a mug that reads "Keep calm and drink tea" so I'm kind of biased.

My day of culinary success continued into the evening as two of my flatmates prepared a chinese dinner (bet you can't guess where they are from). Very neat to see them take raw ingredients and turn them into delicious dishes. Here's the end result! 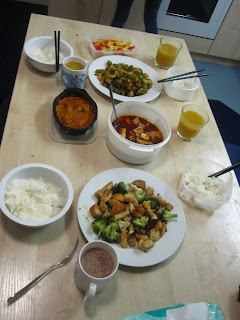 9/22/12: Went to "The Old Queen's Head" pub today which is a historic 16th century building. I am happy to note that their food is very good. Yes, its traditional "pub grub" but its some of the better stuff I've had. Also worth noting, this was my first sampling of fish and chips since arriving in Sheffield. Lasted just under two weeks!
For the beer, I tried a cask ale called "Nutty Black". It's a dark beer (my favorite type) with a very obvious nut flavoring. It's served slightly chilled so it takes some getting used to. Still, very tasty. 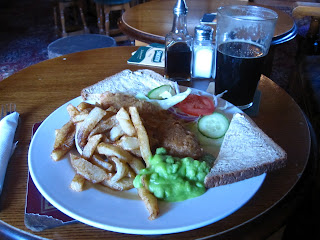 9/26/12: I think it is high time I mention the best non-dairy company I've ever come across. Alpro makes a whole range of dairy free products under the notion of "plant power!". Besides your typical soy based foods, they also use almond and hazelnuts (my favorite). I have yet to come across a product that I don't like! The hazelnut milk, in particular, is amazing. I bet if I add some cocoa I can essentially get liquid Nutella. But their puddings and yogurts finally allow me to eat healthy without sacrificing taste. Sorry Stonyfield, you're out (but I still approve of your sustainable farming!). 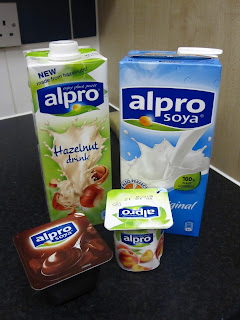 9/28/12: I returned to the Old Queen's Head pub today for a quick lunch. Once again the owners were very kind and friendly. They recommended another beer to me which was a smashing success. For those interested, its called Thwaites Smooth. That is what a beer should taste like. It is worth noting that the "Nutty Black" I had there a week ago is from the same company. I guess I need to try the other brews...who knows, I may have a new favorite beer company. 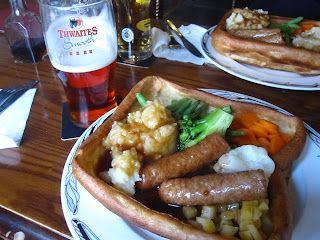 I ordered myself a Yorkshire pudding. Contrary to popular association, this is not a dessert. It is, rather, a pastry/bread like structure made from milk, eggs and flour. According to one food association, it must be at least 4 inches high to be called "Yorkshire". In this case, the pudding contained the meal which represents a traditional "Sunday Roast". This consists of mashed potatoes, fresh vegetables, some form of cooked meat and gravy.
2 for 2 at the Old Queen's Head!
10/4/12: While I've had this for a while, its only now that I've decided to talk about it! What is this wonderful creation? Henderson's Relish! It is a spicy yorkshire sauce made right here in Sheffield! (I'm so excited about it that I've already used three exclamation marks) As such it can be found in almost every store and in every pub. I've fallen in love with this stuff and now put it over everything...its especially good in meat filled sandwiches. The company has been around for over 100 years and if Boromir/ Ned Stark likes it, then so do I. 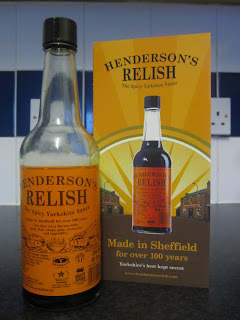 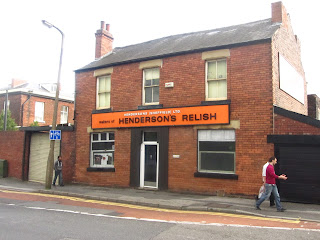 ﻿
10/20/12: Finally got around to trying "Bubble and Squeak"...or at least a gastro-pub version of the original. Bubble and Squeak usually consists of mashed potatoes, some form of meat or sausage and recooked vegetables from leftover Sunday Dinner. The name is derived from the noise the food makes as it is reheated/ fried. For a beer, I had another great cask ale. Lots of ale festivals going on and most pubs rotate ales on a weekly basis. More on ale samples soon! 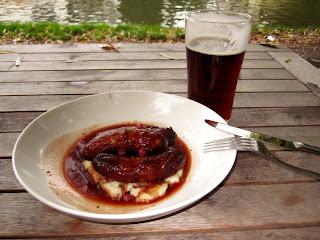 I managed to enjoy my Bubble and Squeak on the banks of the River Cam in Cambridge. The pub itself sits inside of a 16th century house (now heavily renovated). 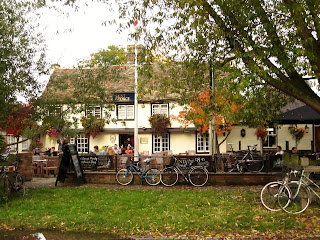 11/24/12: An American Thanksgiving dinner at the University.

12/1/12: Time for a traditional Christmas Pudding! Take cherries, apricots, plums and other related fruit and steep them in brandy (or cognac) for a few months. Add some nuts and encase everything in a type of sponge cake like mixture. Sounds delicious but I think its an acquired taste. The brandy is so powerful I can't taste anything else! I've tried several but just couldn't warm up to it. Oh well, mince pies are better!

﻿
12/9/12: Had a typical Sunday Roast with a golden ale at Ye Old Trip To Jerusalem. This pub is supposedly the oldest in England and dates back to 1189 when Crusaders stopped there before heading off to Jerusalem under Richard I. It is actually built into a sandstone cliff face and lies directly below Nottingham Castle. 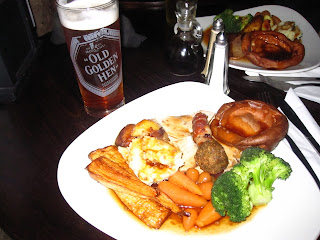 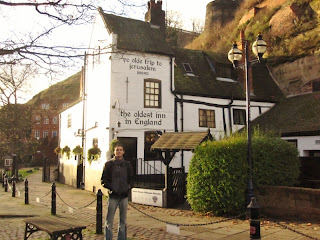 1/13/13: First food update for the new year so it is fitting to have something I eat first thing in the morning...and then first thing for tea time... Scones. They are a quick bread which is lightly sweetened and baked. The closest US food I can compare them to is a biscuit but even that does the scone a dishonor. Alot of times the scone includes fruit. It forms an important component in a Devonshire High Tea and is usually served with jam and clotted cream.
﻿
﻿