4/14/13: Leicester
(Located in Leicestershire)﻿
So there was some commotion in the history and archeology worlds this past February. Apparently some king was found under a parking lot or something...
The discovery of Richard III is indeed a big deal. Some myths were destroyed while others were justified. And with Richard comes a massive boost in public interest, tourism and funding. Everyone wants in on the action. You'd be hard pressed not to run into something on Richard regardless of where you are:﻿ 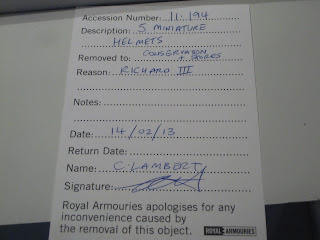 I figured it was about time I make my way down to Leicester and see this all for myself. Like many cities in England, Leicester has connections to the Civil War, Tudors, Wars of the Roses and the Romans. Let's see what's on! 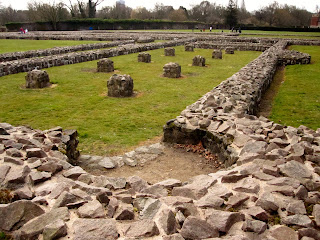 Leicester Abbey or St. Mary of the Meadows. This is the final resting place of Cardinal Wolsey. To learn more about the abbey, see my page entitled "UK Tour: Abbeys".
RICHARD III TOUR

A Travelodge now sits on the site of the Blue Boar Inn. Richard III supposedly spent the night there before heading off to Bosworth the following morning. The inn was demolished in the early 1800s.
Legend tells us that the inn was originally named the White Boar Inn. The white boar happened to be Richard's personal emblem. When Henry Tudor entered Leicester victoriously, the owner quickly painted the boar blue to match the heraldry of the Earl of Oxford, a prominent Lancastrian commander who secured victory at Bosworth. 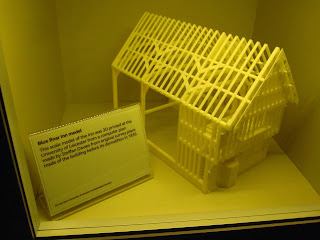 A reconstruction of the Blue Boar Inn based on ground excavations and suriving prints. 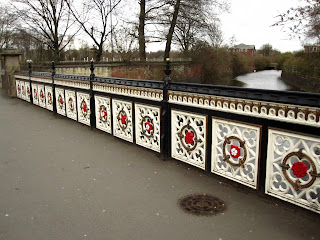 Bow Bridge (unfortunately not the original). Richard and his army crossed this bridge en route to Bosworth. His spur hit a stone in the wall prompting a soothsayer to predict that Richard, on his return to Leicester, will hit his head on the same spot. After the battle, the deposed king's corpse was slung over a horse and brought back to the town. When it crossed the bridge, his head cracked open on the exact spot. Or so the legend goes (what's with all the legends in this place?!).

A sign next to Bow Bridge. Eh, close enough. 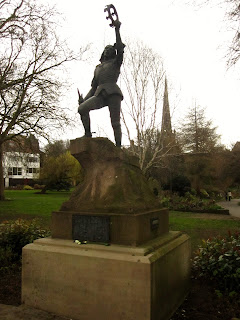 An idolized statue of Richard III in the castle gardens.

The famous car park where the king's bones were discovered. The park lies on the foundations of the Greyfriars priory, particularly the church. Richard was buried just before the choir, a position reserved for high ranking individuals. 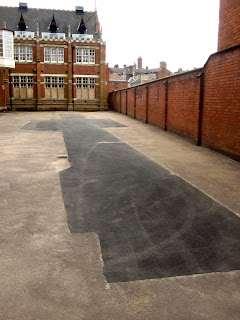 One of the three patched trenches dug by the University of Leicester last September. In casting out three trenches, archeologists hoped to identify building walls to create a grid of the Greyfriars priory. Oddly enough, the first trench was a direct hit with Richard's bones being discovered almost immediately. Oblivious to the fact, the team covered them back up and continued digging! 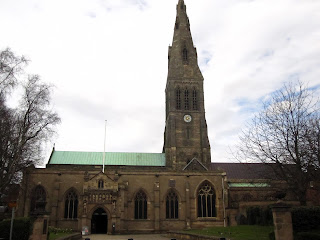 Leicester Cathedral: the final home for Richard III. Unless York decides to launch Wars of the Roses part two. Having seen how invested the city is in him, I think Leicester is a decent spot. However, it seems the king himself wished to be buried at York. The Minster would be a far better spot in terms of visitors. Since they have space, the tomb can be as elaborate and grand as they want unlike the restrictions in the cathedral above. 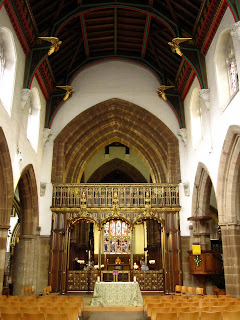 The interior of Leicester Cathedral. 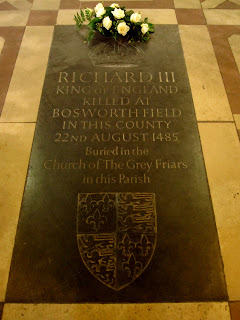 Richard already had a memorial marker in the cathedral with an idea of where he was. This memorial lies in the choir and the idea is to put Richard here as well. The Richard III Society had their tomb proposal rejected because it was too large. I can understand why given how small the choir really is!
THE MEDIEVAL EXPERIENCE 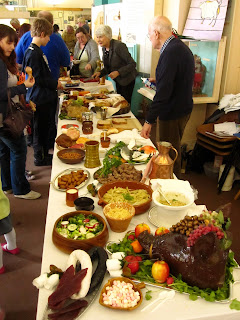 The Jewry Wall museum had a great event today with all sorts of medieval activities. I spent alot of time around the medieval banquet table sampling all sorts of historic delicacies: marchpane, rolled dates in malmsey, pottage, steamed fennel, venison sausage and Bosworth jumbles. I took a picture of their recipie book and am anxious to try some when I go home. 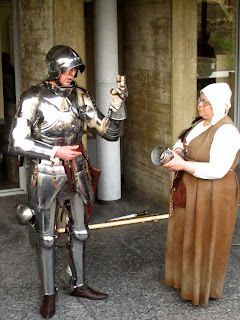 A presentation on arms and armor. Hmm, if anyone needs a birthday present for me...

The day was capped off by a two hour medieval music concert. It was wonderful hearing some of my favorite songs live. Above we have a selection of woodwind instruments. 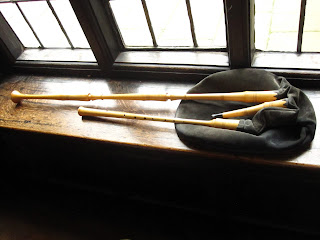 The English bagpipes. If I knew there was an easier version, I would've chosen them instead of the highland pipes!
HISTORIC LEICESTER﻿

The Guildhall. The earliest parts of this building date from 1393 when it was built by the Corpus Christi Guild. After their suppression in 1547, the building was used as the town hall. It currently sits next to Leicester Cathedral and houses the temporary exhibition on Richard III. 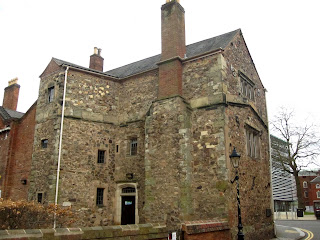 The Newarke Chantry House. William Wigston, a wool merchant, built this house in 1512 to house two priests who served the nearby church. 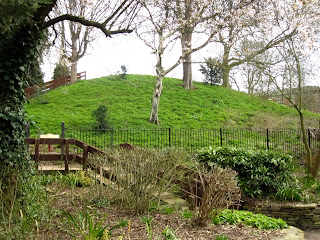 The motte of the Norman castle can still be seen (and climbed). 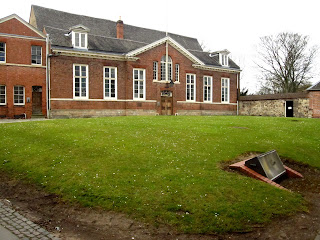 Behind the 1695 brickwork lies the castle great hall. It was built by the 2nd Earl of Leicester in 1150 and served as a court as late as 1992. Some of its timbered structure still dates from the 12th century. 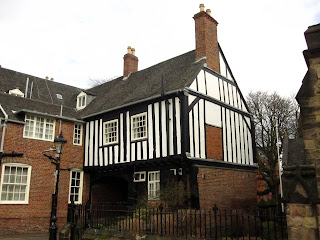 Castlehouse Gateway, built in 1446. This would have formed part of the living quarters within the castle from the 15th century onwards. 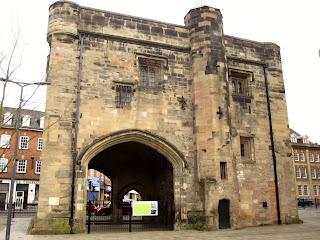 The Magazine Gateway. This served as the primary entrance to the Newarke precinct. It was built in 1400, served as a prison in the 1560s and was an armory (magazine) in the 1600s. 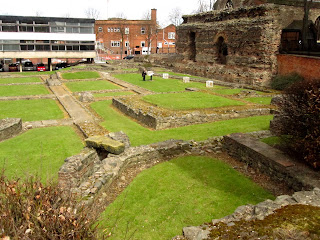 The Jewry Wall. These grounds show the remains of a Roman bath house. Saunas, hot rooms and warm rooms utilized ground floor heating under their tiles. The remains of a hypocaust is nearby.