10/13/12: Stratford Upon Avon
(Located in south Warwickshire)
I spent last Saturday on a bus driving through the wonderful English countryside to reach Stratford Upon Avon which was put on the map as the birthplace of poet William Shakespeare. It is an obvious must-visit for any Shakespeare fan, but if you are a Tudor fan I must add a caveat. My focus, for example, is more on the early Tudor period i.e. the Wars of the Roses to the death of Henry VIII (1460-1547). Stratford, as it stands, is from the later Tudor period. In fact, its Elizabethan. Granted I am still a work-in-progress historian, but I think there are stark differences between the overall Tudor period and Elizabethan era. Even how we distinguish the two (period and era) denotes differences. An obvious example is the clothing. Typical Tudor doublets and breeches were worn tightly and were eventually replaced by quite baggy and padded clothes towards the end of the 16th century. Let us not forget the padded shoulder rolls and large ruff worn around the neck! Architecture, science and the arts all evolved quite drastically under Elizabeth, heralding the "Golden Age" of England. This rapid expansion means that the earlier Tudor period now stands as a completely separate entity despite having the same house on the throne. I have a lot of interest in the last vestiges of medieval life in the early Tudor period but by Elizabeth's death in 1603, these are all gone. It is worth noting that the Renaissance and the Reformation were major contributors towards the shift to early modernity as well.
That said, I did enjoy Stratford but I do not think I need to see it again. At least I came away with plenty of photography so here we go...﻿ 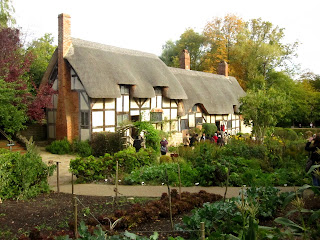 Anne Hathaway's cottage. This is the childhood home of Shakespeare's wife Anne. It is built in the typical timber framed style of the 15th and 16th centuries replete with thatched roof. 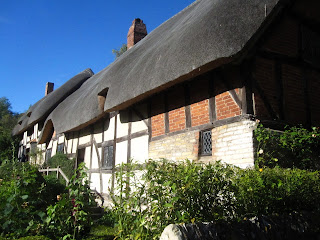 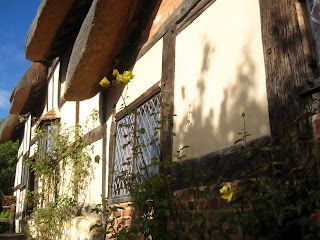 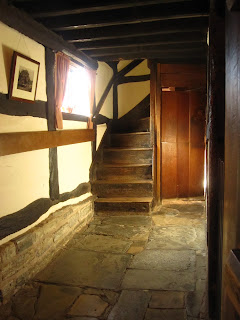 Extensive renovation work was done inside. The only contemporary in-situ flooring is in the kitchen. 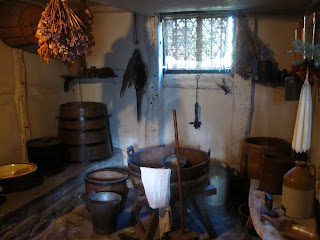 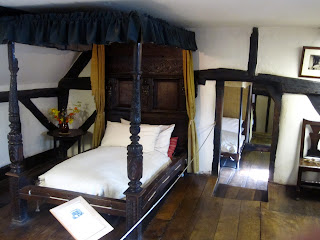 While Anne's cottage lies on the outskirts of the city, we must travel towards the center of town to find, as a 19th century author puts it: "the Mecca for literature enthusiasts". 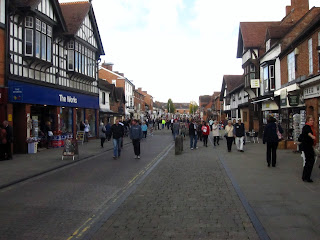 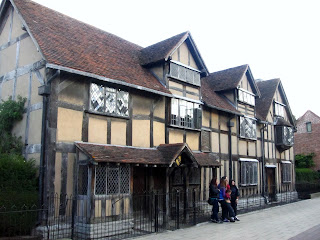 Shakespeare was born in this house in 1564. It has been heavily restored to what is thought to be its 16th century layout. A modern museum is nearby to help tell the story of everyone's favorite bard. I myself did not venture into the house as I had planned to see something else: 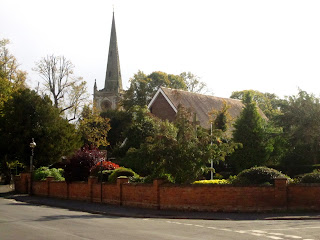 Hidden behind the trees and buildings, right next to the river Avon, is Shakespeare's baptism and burial church. 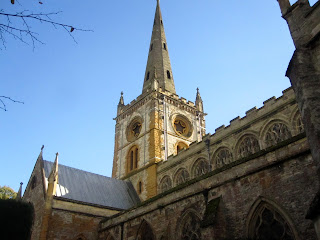 Holy Trinity Church has extensive areas dating from the early 1200s. These include the tower, north/south transepts and the nave. One of the four pillars supporting the tower even has a medieval stairway: 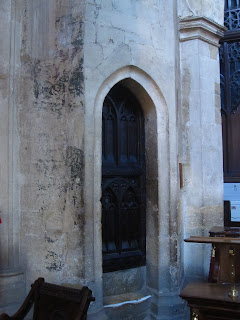 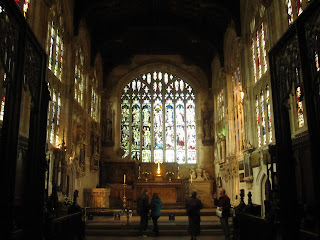 The beautiful chancel was built around 1491. Shakespeare was interred here in 1616. 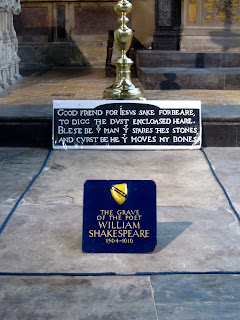 His grave is so worn that both its outline and text must be emphasized. To your left is the grave of his wife Anne Hathaway. Other family members lie to the right. 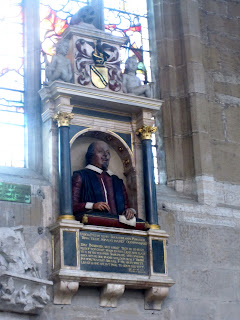 Shakespeare's funeral monument, built in 1623.
A quick video of the chancel. Yes, I added some Gregorian chants to blot out people talking. Yes, I realize that Gregorian chants are more aligned to monasteries and not parish chruches. I'm a bit limited on musical resources here as my full library sits at home! 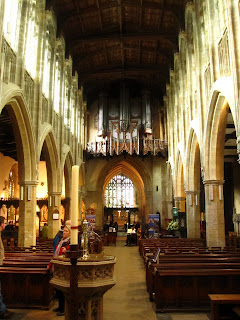 The view from the font at the back of the nave. Note the massive organ above the crossing. The north and south aisles were built in the 1300s with the north containing some elaborate Elizabethan monuments: 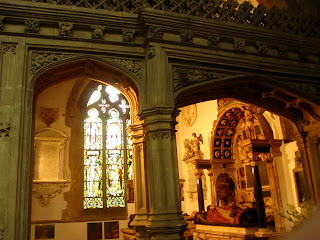 The Clopton Chapel in the north aisle. Joyce Clopton is buried here with her husband who was James I's master of ordnance. 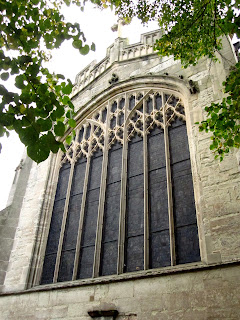 A view of the chancel window from the riverside.


Stratford is dotted with timber framed buildings. While I do not doubt that most are authentic, they must have been heavily renovated to maintain their strength, form and color. 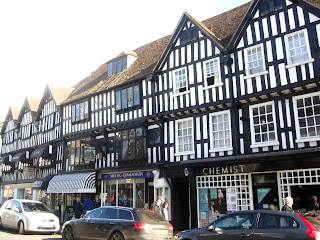 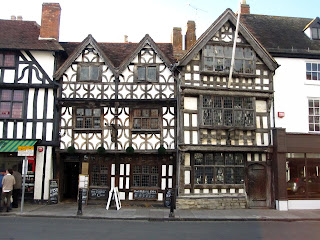 The best way to tell a house is original? Warping! 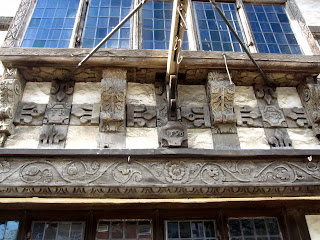 According to the date "stone", this house was constructed in 1596. 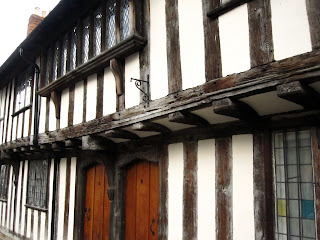 An almshouse built in the 15th century to help house the elderly and poor. It still serves this purpose today. While the outside timber and overall outline is still original, the interior has, of course, been heavily modernized. 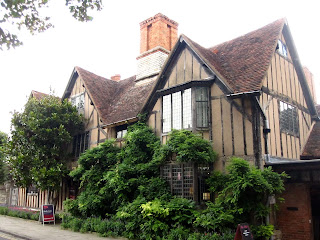 Hall's Croft was owned by Shakespeare's daughter Susanna along with her husband Dr. John Hall. 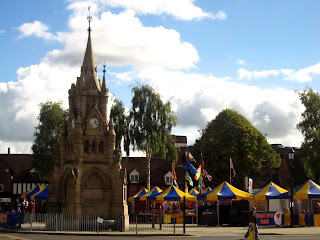 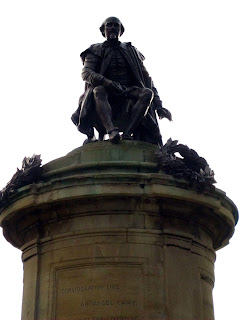 And we finish with a statue of the man himself.