To many, Nottingham Castle is known via Robin Hood lore, the stronghold from which the sheriff and evil King John conducted affairs of state. While its role in Robin Hood may or may not be true, the castle did have a very exciting history.

First built out of wood in 1067, the castle was one of a string of Norman structures built immediately following the Battle of Hastings in 1066. This was William the Conqueror's attempt at subjugating the defeated Saxons. Windsor and the Tower of London are other examples of the first line of castles.
Henry II then had the castle rebuilt in stone in the 12th century.

His son, Richard I, went off to lead the Third Crusade to Jerusalem. In the meantime, the king's brother John ruled. When Richard did not return (he was captured for ransom in Austria), John crowned himself King. This led to a battle at Nottingham in 1194 between John's supporters in the castle and Richard's forces besieging it.

In later centuries, a coup saw the death of Edward II which allowed his wife and her lover to rule as regents. Edward III, son of the ill-fated king, came of age and led a counter-coup up into Nottingham Castle via the passageways carved into the sandstone rock. The queen and her lover were taken prisoner and Edward began his long and successful reign. The passageway used by Edward still remains and can be toured. It is known as Mortimer's Hole, after the name of the lover, Roger Mortimer.

The castle was also heavily used during the Wars of the Roses belonging at seperate times to Henry VI, Edward IV and Richard III. The later was staying here when he learned of Henry Tudor's landing in Wales. The position of both forces put them on a collision course for Bosworth.

The castle was destroyed following the English Civil War to ensure it was never again used for defense. All the remains are foundation ruins as will be seen below. 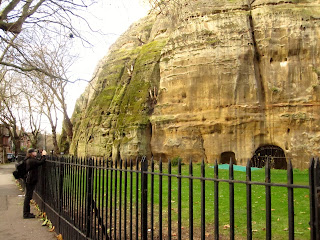 The castle sits upon a 130 ft cliff face made of soft sandstone (Finnish guy for scale). 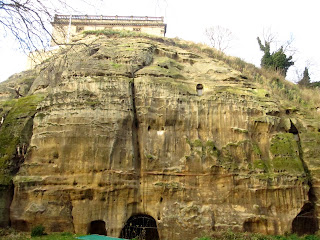 The sandstone is quite soft and rubs off when one's hand touches the wall. Erosion from the weather is clearly visible. 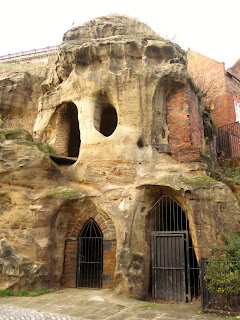 The gate on the left is where Edward III and his followers entered to climb up to the top of the castle. Above this gate was the home of a medieval worker who built his dwellings into the rock face (note the bricks used to help build up the walls). 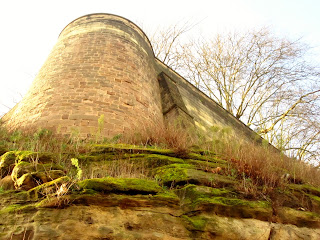 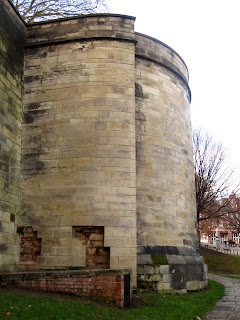 One of the bastions restored during the Victorian period (most likely). 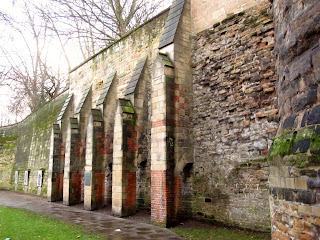 Dendochronology shows us what is old and what is new. 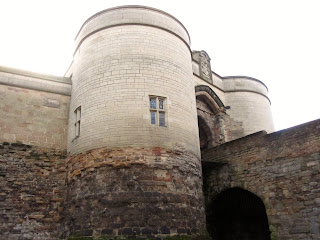 This was the only entrance into the castle (besides the secret Mortimer's Hole). It was built between 1251-1255 and was accessed via a drawbridge. The old gatehouse foundations can still be seen. 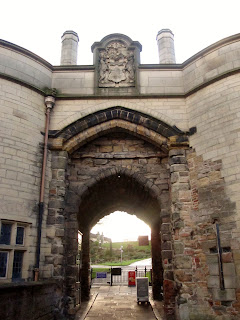 This picture nicely illustrates original and refurbished stonework. The arms belong to, I believe, Charles I who was the last monarch to occupy the castle. 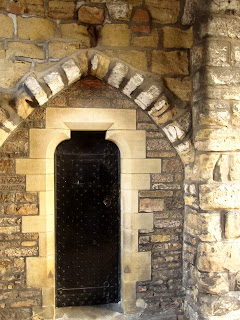 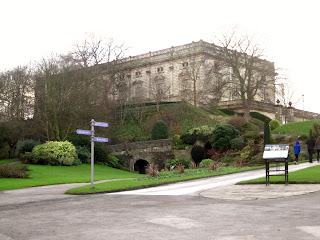 The inner bailey and keep of the original castle are now occupied by a ducal mansion built in the late 1600s. It now houses a museum. Not much of the castle remains inside the walls. The medieval bridge is still standing in the middle of the picture. 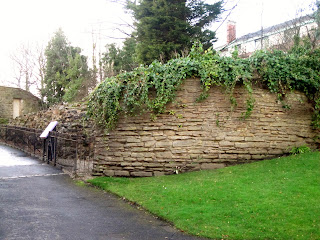 This is the base of the north east tower built by Henry II and replaced the prior wooden structure. 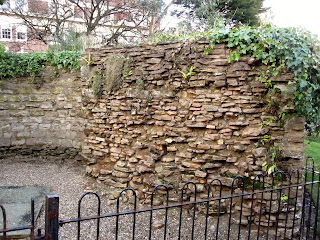 This cross section gives a good example of the thickness of defense walls. 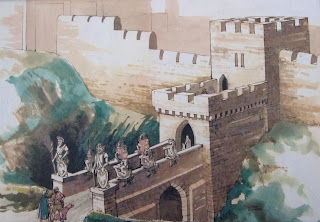 Once past the outer gatehouse, attackers had to cross another moat and bridge to get to the inner court. This is what the bridge may have looked like in medieval times. (Picture courtesy of Nottingham City Council). 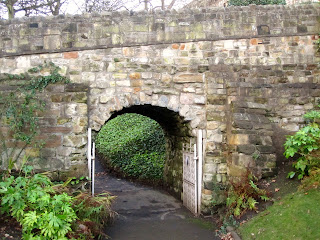 And the bridge today, much altered from the contemporary depiction above. 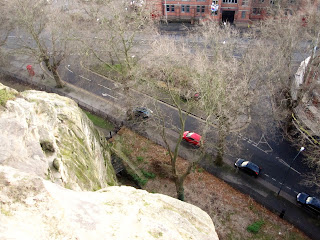 A view down the sandstone cliff face. A strong defensive position if there ever was one. 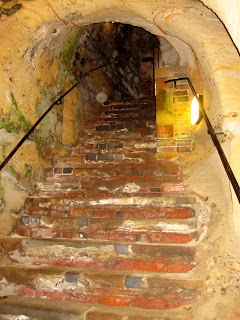 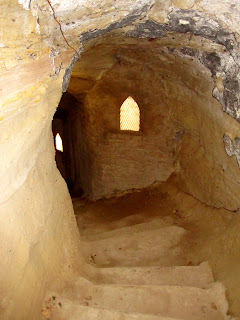 Following in the footsteps of Edward III. 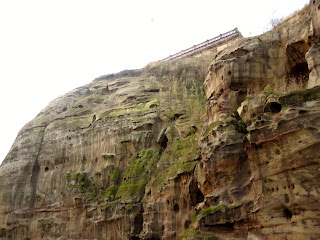 Mortimer's Hole cuts through this part of the rock. 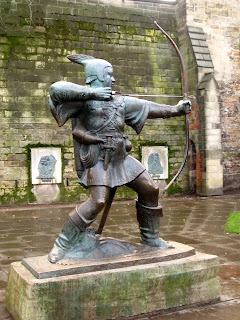 Just outside the castle is the statue of Robin Hood. 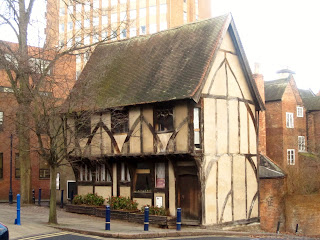 Medieval Nottingham can still be seen in various areas of the city today including this structure opposite the castle. Called the Severns House, it was built in the mid 1300s. It was taken apart, moved and completely rebuilt on this spot in 1970.