A month long gap between posts! My commitments were all over the place but now it is time to refocus on my last few months in Sheffield and all the exciting events to come. I'll have a post on that later.

For now, here is the latest "History In Sheffield" installment: Lady's Bridge. 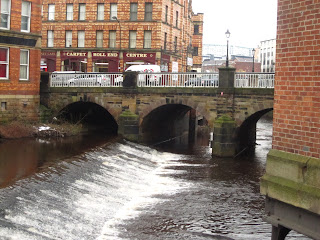 William de Lovetot, the first Lord of the Manor, had the River Don bridged for the first time in the 12th century. The location is the same today and it represents the heart of medieval Sheffield. The Castle stood immediately to the east of the bridge along the riverbank and the town just south. 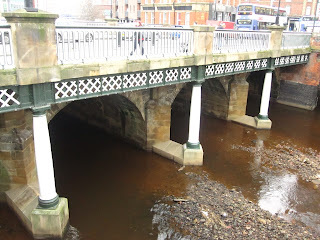 Several of the expansions are evident. The original medieval bridge from 1486 is sandwiched inside.﻿

The bridge that exists today was built in 1486 when George Talbot, 4th earl of Shrewsbury was Lord of the Manor. Made of stone, it consisted of five arches and was just over fourteen feet wide.
A chapel was attached to the bridge at the southeast corner though notably on land rather than directly above the river. This chapel, like many chapel bridges, greeted weary visitors entering the town limits. Dedicated to St. Mary, the bridge thus gets its name: Lady's Bridge.
In his will, George Talbot ensured the mass would be sung for his soul at the chapel and a priest was paid for the effort. As it was a catholic structure, it was targeted during Henry VIII's dissolution of the monasteries. In 1547 the towns-people converted it to a warehouse to avoid destruction. Unfortunately, the chapel could not avoid town expansion and was dismantled during one of the bridge's three widenings (1760) 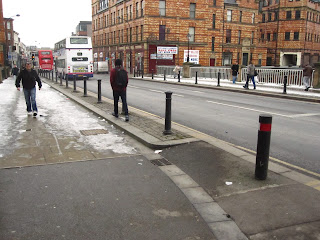 The original bridge was just as wide as the roadway itself. 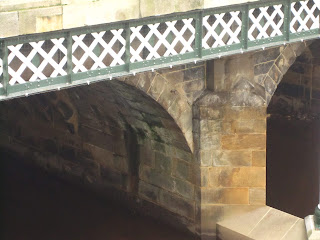 At the left-center of the picture are several ribs which support the original vaulting.
﻿

An example of a fully intact chapel bridge lies in Rotherham, not too far from Sheffield. Rather than be destroyed or widened, a larger bridge was built parallel to it for traffic and pedestrians. Its original parameters thus gives us an idea of what the Lady's Bridge may have looked like. They were also both built at the same time with Rotherham being just three years older. 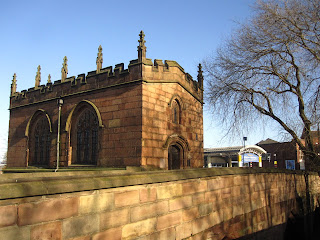 The Chapel of Our Lady on Rotherham Bridge. 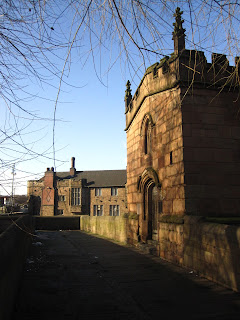 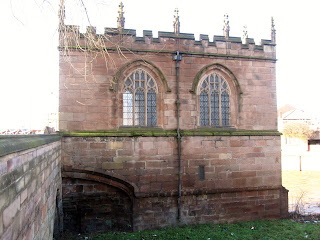 The river banks were receeded at the time. 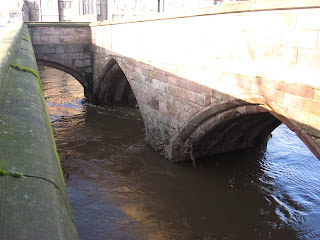 The ribs and arching is very similar to what remains under the Lady's Bridge. 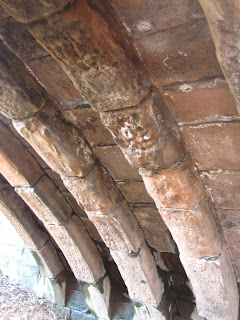