It is no secret that my interest lies in medieval Sheffield with many of my posts in this ongoing series focusing on events/ locations from 1200-1600 CE. The city is known mainly for its Victorian era steel industry and I'll get to that...eventually. But what happened in between?

The first maps and prints of Sheffield date from the Georgian period (1714-1830). The town had yet to see a rapid increase in population and much of it was still rolling green fields. The area around the cathedral (then a parish church) and castle market was the central hub. Everything started to change when crucible steel was discovered here in the 1740s. Steel was melted in crucibles to give it strength and uniformity. Thus, the end product was of a much higher quality and Sheffield was on the path to becoming the "Steel City".

A local cutler named Thomas Boulsover invented silver plating in 1743 by fusing silver around a copper ingot. This greatly cut down on the raw material cost of using solid silver. This process eventually became known as Sheffield Plate. His marker can be found in Tudor Square: 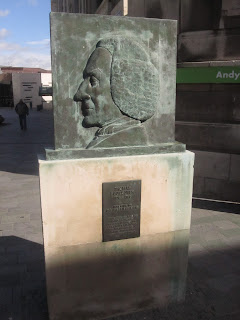 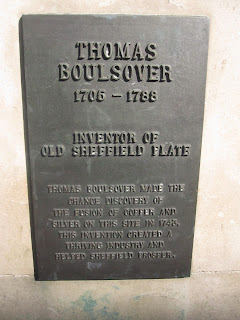 With the discovery of new metal processes, Sheffield began building outwards. The Georgian legacy can still be seen today in a few select locations. Paradise Square (1), the largest concentration of Georgian buildings, is just across from Sheffield Cathedral. The oldest surviving brick building is "The Banker's House" (2). Simply get off the "Cathedral" Tram stop and walk behind the church to find yourself in Georgian Sheffield! 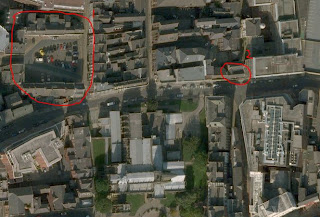 Aerial shot of what was once a prominent Georgian area. Photo courtsy of Google Maps. 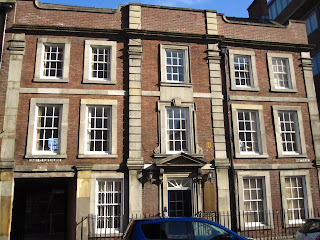 Sheffield's first solid brick building was built in 1796. The oldest surviving brick/ Georgian house is "The Banker's House" from 1728. 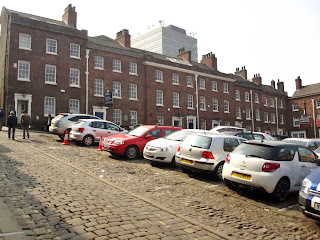 Paradise Square saw the first five houses built in 1736. It wasn't until 1771 that the three other sides were also completed thus enclosing the "square". The square is now a car park. Ah, progress. 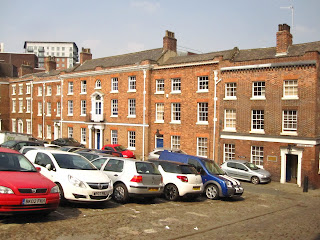 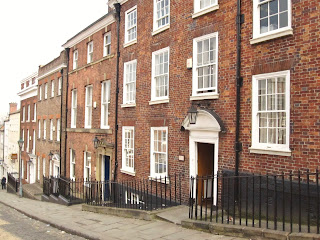 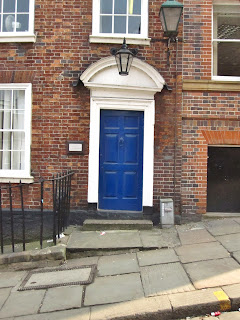 A typical Georgian town house is, basically, a bunch of interposed rectangles. The only curvature tends to be found above the doorway. I've noticed that blue doors seem to be a prominent give away, but a variety of bright colors can be substituted. For example, Dublin, Ireland is full of colorful Georgian doors.﻿ 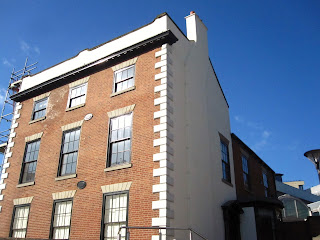 "The Leader House" was built by the Duke of Norfolk in 1770. It sits next to the Millenium Galleries and across from Sheffield Public Library. 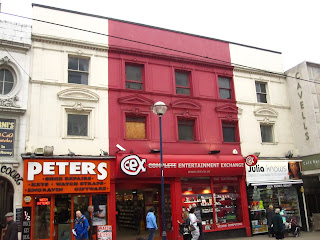 A nice Georgian house just off of Fargate. Such a shame about its poor condition and an even worse paint job. Considering a large portion of this area was flattened by the Blitz in 1940, I'm surprised that it still stands!
Time to grab my powdered wig and continue exploring!