On this day in 1095, the seeds of the First Crusade were planted by Pope Urban II at the Council of Clermont in France. 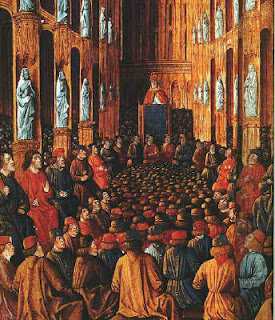 The Council of Clermont from a 15th century interpretation.
Taken from the Bibliothèque Nationale de France
Weary of the constant warfare amongst the nobility and warrior class of Europe, the Pope looked for a new avenue through which the violence could be directed. We must remember that it is still early in the formation of European kingdoms and many kings did not yet possess the power they would later hold. Instead, Europe was split into individual territories ruled by dukes, counts, etc. All of them held their own wealth, land and arms (through feudalism/ serfdom) and they defended themselves accordingly. At the time, violence against fellow christians was a serious sin. Fighting for the church, however, was something entirely different and actually encouraged. All that Urban needed was a reason...and a target.

This came from the east when a messenger of Alexius Comnenus, Emperor of Byzantine, appealed to Rome for help in pushing back the encroaching Seljuq Turks. Seeing an opportunity to not only rid himself of constant infighting but to also strengthen Rome's grip on territory, Urban preached a sermon at Clermont on the 27th of November. There are five remaining accounts of his speech, all of which differ. Robert the Monk presents it as follows:

"... this land which you inhabit, shut in on all sides by the seas and surrounded by the mountain peaks, is too narrow for your large population; nor does it abound in wealth; and it furnishes scarcely food enough for its cultivators. Hence it is that you murder one another, that you wage war, and that frequently you perish by mutual wounds. Let therefore hatred depart from among you, let your quarrels end, let wars cease, and let all dissensions and controversies slumber. Enter upon the road to the Holy Sepulchre; wrest that land from the wicked race, and subject it to yourselves ... God has conferred upon you above all nations great glory in arms. Accordingly undertake this journey for the remission of your sins, with the assurance of the imperishable glory of the Kingdom of Heaven".

With rousing cries of "Deus Vult!" (God Wills It), the public rushed to "take the cross" by pinning scraps of cloth in the form of the cross to their clothes. The offer of a remission of sins appealed to many, including the warrior class whose hands were stained by their profession. The first group to head out from Europe became known as the Peasant's Crusade led by Peter the Hermit on his donkey. Emperor Alexius didn't know what to make of the rabble sent to him (he expected perhaps 1000 knights, not 20,000 non-combatants). He let them pass right into the teeth of the Seljuks and almost all were massacred. Later in 1096 and early 1097, the true crusading force arrived under the command of  Bohemond of Taranto, Tancred, Godfrey of Bouillon, Baldwin of Boulogne and Hugh I, Count of Vermandois.

In July of 1099, despite all odds, the Crusaders captured Jerusalem. Pope Urban II did not live to hear the good news. He died fourteen days after the city's capture but before a messenger could read Europe. The success of the First Crusade led to many subsequent attempts, but none could ever reach the success of their predecessor.
Posted by Michael at 01:57