Charles XII edition!
My main reason for travelling to Stockholm was to find anything associated with my current history fascination. Thankfully, there was plenty to see! I hope to incorporate my photography into a future lecture similar to my "Kingdom For A Heart" talk last year. 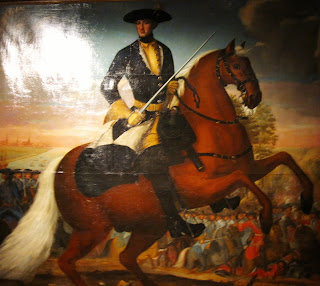 Charles XII never wore the grand outfits of kings. He felt most comfortable in a soldier's uniform and led a spartan life alongside his men. He is noted for abstaining from alcohol and women which has led to accusations of homosexuality. 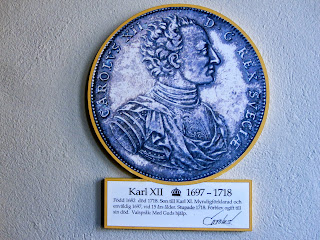 Print of a contemporary image of Charles. He shunned wigs which were growing in fashion amongst the European courts and wore his hair cropped like that of his soldiers. 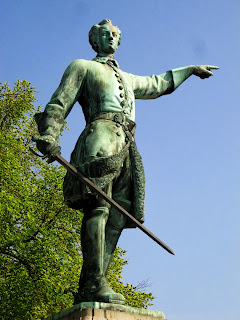 Charles received a statue on the 150th anniversary of his death in 1868. He wears his beloved cavalry uniform with an outstretched arm pointing towards Russia and the site of his only, but catastrophic, defeat at Poltava.
The following pictures are presented in chronological order according to the life of Charles XII: 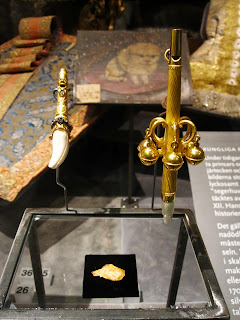 Whistle toys belonging to the infant Charles. A piece of his foetal membrane is preserved on the black felt below. According to superstition, if a royal infant is born with part of the membrane on their head (like a caul), they are destined for greatness. 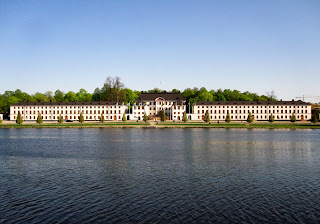 Karlbergs Slott: This palace is where he spent his early childhood. He also laid in state here before his internment at Riddarholms Kyrkan. 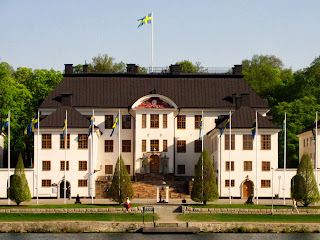 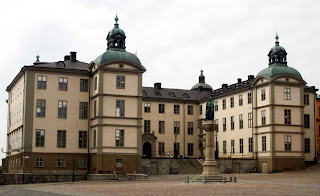 Wrangelska Palatset. When the Tre Kronor Fortress/ Palace burnt down in 1697 (Charles' ascension year), the court moved to this location just across the water on Riddarholmen. 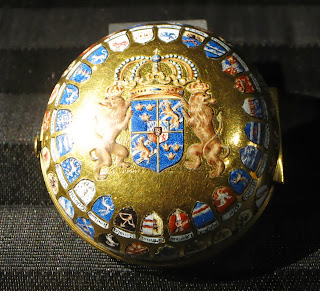 The pocket-watch of Charles XII. It shows all the providences of the Swedish Empire at the time. 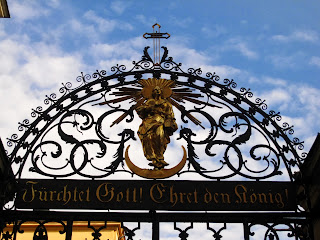 While not associated with Charles, this phrase over a church gate fits his views perfectly: "Fear God, Honor Thy King". At his coronation, Charles crowned himself. He believed he was ordained by God, not by the church and expected absolute obedience. In fact, he was Sweden's last true absolute monarch. With his death, the Age of Liberty began.
"All embrace me, its my time to rule at last. 15 years have I been waiting to sit upon my throne. No allegiance, I will swear no oath! Crowned by God, not by the church as my power is divine" -Sabaton 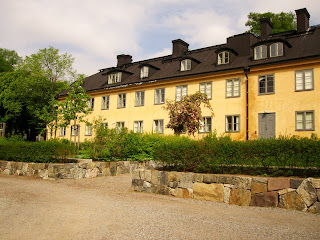 On the island of Skeppsholmen, Charles built the "West Residence" which housed his bodyguard unit. Because they were away on duty, the empty building was used to house the poor. 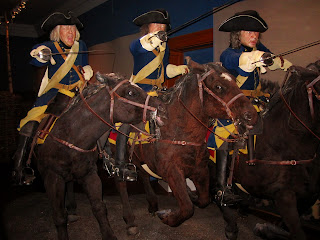 Swedish cavaliers.
When Charles ascended to the throne at the age of 15, his enemies sought to take advantage of his supposed inexperience. Russia, Poland and Denmark allied together and initiated the Great Northern War (1700-1721). Charles secured swift and decisive victories early on and knocked both Denmark and Poland out of the war. The highwater mark was the victory at Narva. Charles then invaded Russia and set a precedent that plagued Napoleon and Hitler in the centuries to come. At Poltava, the Swedish army was crushed. Denmark and Poland then reneged on their treaties and re-entered the war. Charles tried to take Norway (then part of Denmark) in 1716 and again in 1718. The latter ended with his death outside of Fredriksten fortress (see my post on Norway a few weeks back).
"I have resolved never to start an unjust war but never to end a legitimate one except by defeating my enemies" -Charles XII 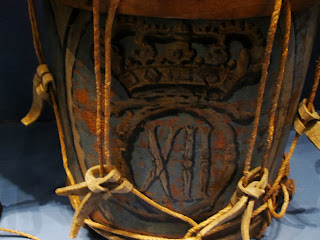 A drum from the Great Northern War with the monogram of Charles XII. 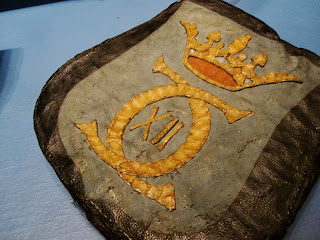 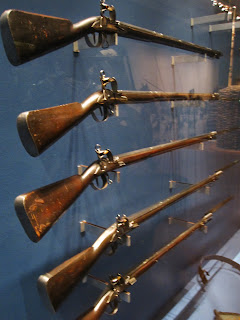 The Swedes employed the "cold steel" tactic. Marching in rank, they would fire off only one volley before charging the enemy with fixed bayonets. Close quarter combat was preferred over ranged. 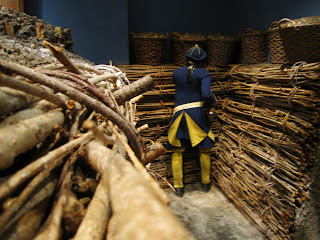 An example of Swedish trench works...perhaps similar to those built outside Fredriksten. 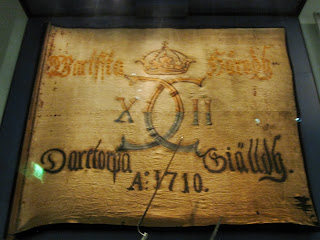 A rather plain regimental banner. 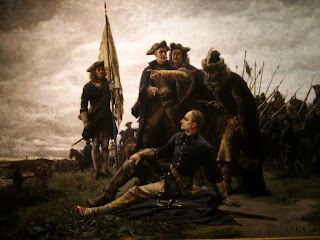 Gustaf Cederstrom's painting of Charles XII after the battle of Poltava. Because of the king's numerous injuries (note the wounded foot), he could not lead his men directly. Given his noted ability to ignore even the worst of pains, that says something. Despite being massively outnumbered by the Russians, could he have led the army to victory? It is worth mentioning that he never lost a battle in which he held direct command. The king is considered one of the greatest generals of the period. Unfortunately for him, the Swedish Empire was unsustainable and its enemies too powerful. He was merely postponing the inevitable. 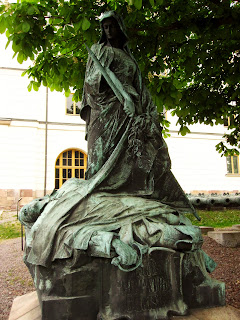 The Poltava Memorial outside of the Army Museum. It depicts Mother Svea (similar to Britannia for England or Liberty for America) unfurling a Swedish flag over a fallen soldier at Poltava. The inscription reads: "To The Fatherland's Fallen Sons".
"Rode to certain death and pain, Swedish soldiers met their bane, sacrificed their lives in vain, Poltava!"  -Sabaton 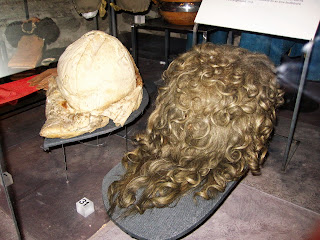 When Charles lost at Poltava, he fled to the Ottoman Empire where he stayed for four years. Eventually the Turks had enough of him and attacked his garrison. Charles survived a sabre blow to the head thanks to the otterskin cap he was wearing (on the left). He fled to Swedish territory by disguising himself as a captain named Peter Frisk. The wig was part of that ploy. His 15 day ride became legend: "was sorgt ihr doch? Gott und ich leben noch". Translated: "what worries you so? God and I yet live". 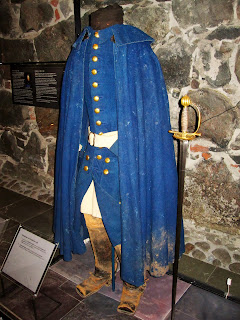 Preserved at the royal armory is the uniform that Charles wore on the night of his death on November 30, 1718. Again, it is a standard cavalry uniform though the fabric is of finer quality. His boots are made from cow leather with wooden soles. 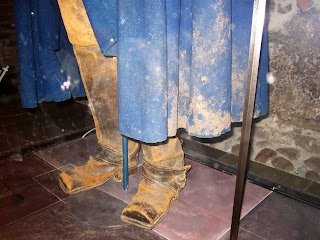 The mud from the trenches still clings to the bottom of his coat. 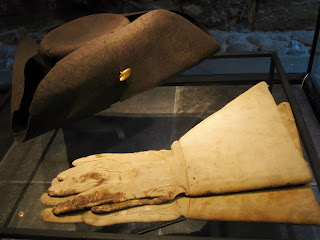 His felt hat still has the 19.5mm bullet hole, visible below the gold button. One historian has argued that this is crucial to deciding whether the king was killed by the enemy or from within. I tend to agree with him but that is for another post. His gloves are still bloodstained as his head sunk into his coat and fell onto his crossed arms. 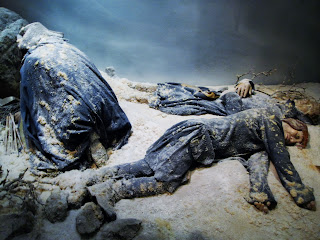 The retreat from Norway after the king's death became known as the Carolean Death March. Because of a terrible blizzard and low supplies, fully half of the army never made it home. 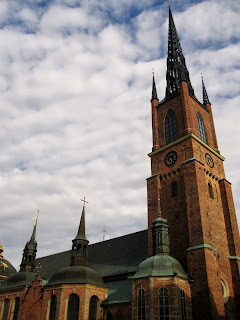 The king was laid to rest at Riddarholms Kyrkan, the royal burial site. 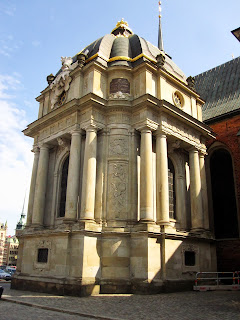 The chapel in which the Carolean Kings lie was started in the 1660s. By 1697 the vault was complete but the structure required a wooden roof. It wasn't until 1742 that the chapel was complete. 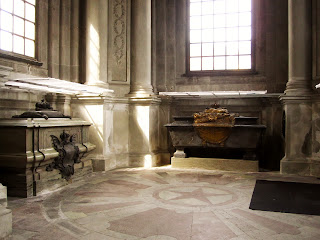 If one subscribes to the theory that Charles was killed from within, Fredrick I is often seen as a major conspirator. Ironic then that he lies next to the man he had killed (supposedly). 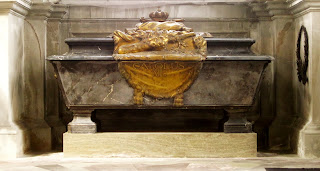 The black marble sarcophagus of Charles XII. I always feel the overwhelming press of history when I stand near the tombs of the people I research. It is indescribable. 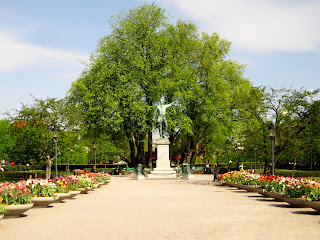 Another great picture of the king's statue at the Kungstradgarden. 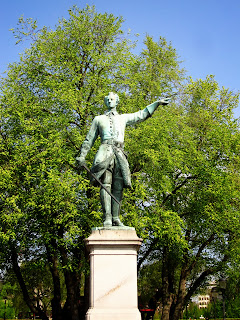