Nothing sparks the imagination like a set of ruins: What stood here? How did it look? Who lived here? With Hardwick Old Hall, we can have some questions answered thanks to the extensive level of remains. Built over nine years by the formidable Bess of Hardwick, it was a grand Elizabethan manor house which held a dominating position on the landscape. Bess could take her guests up on the rooftop and, on a clear day, point out her other holdings at Chatsworth and Wingfield.
The legacy of the Countess of Shrewsbury lives on through the descendants of her second son who was the patriarch of the Cavendish family (the Dukes of Devonshire). Their legacy can be seen at Chatsworth Manor.
Our concern, over the next three articles, is with Hardwick. So let's take a look. Link to the full article is on your right under UK Tour: Hardwick Old Hall. 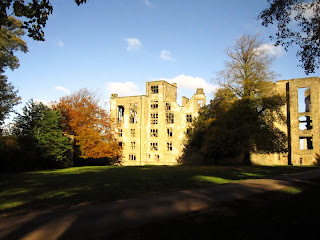