"Once More Unto The Breach!"

Those are the infamous words given to Henry V at the Seige of Harfleur courtesy of one William Shakespeare. Today, however, does not mark the anniversary of this battle but rather one of far more importance to the English and arguably one of the greatest in the annals of warfare: AGINCOURT.

On this day in history, 597 years ago, Henry V earned a decisive victory against the French during the Hundred Years War. While the overall war was a conflict over French dominions and the right to it's crown, Agincourt was a desperate gambit for the English to retreat to their stronghold of Calais.

Background:
Suffering from widespread dysentery and disease, Henry V's once glorious force of 11,000 was a pitiful ~6,000 only two months later. The King wanted to retreat for the English held town of Calais before returning to England. In his way stood a force of up to 20,000 French lead by Constable Charles d'Albret (The French King Charles VI suffered from mental illness and could not lead his troops effectively).

Terrain:
The greatest battles in history usually involved some sort of tactical renaissance or cutting-edge weaponry. In the case of Agincourt, terrain won the day. The battlefield was a narrow pass sandwiched between the dense woods of Agincourt and Tramecourt. This made flanking a non-factor which immediately gave Henry's much outnumbered force a distinct advantage. It had also rained quite hard the night before and the field was mess of water and mud.

Deployment:
Henry ordered his archers to deploy on both flanks as well as at the front of his vanguard. To combat the 1,200 French who were mounted, the archers sharpened wooden stakes and hammered them diagonally into the ground which immediately neutralized the effectiveness of a French cavalry charge. The rest of the King's knights and men-at-arms deployed in the center.
The French deployed in three battles, one behind the other. Many nobles placed themselves in the first battle (vanguard) because they wanted a reckoning with the English who embarassed their fathers and grandfathers at Poitiers and Crecy years before. This meant that critical troops such as archers and crossbowmen were sent to the rear. In hindsight, the last battle line didn't even fight as the press of bodies was too thick. 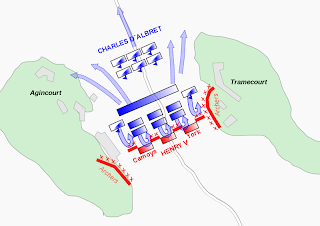 Battle:
After an exchange of bowfire, the French cavalry charged the English lines. The galloping tread of thousands of hoofs broke up the already wet and muddy ground, making the terrain conditions even worse for subsequent French units who had to advance through. Meanwhile, the English longbow (feared for its "Arrow-Storm" volleys) decimated the ranks of horses. Injured steeds threw their riders and fled back through the advancing French, knocking them over and even killing some.
With the failure of the cavalry charge, the main body of French troops advanced. This contained most of the dismounted knights and nobles who were all heavily armored. They had to advance 300 yards through thick mud and, eventually, over the bodies of their dead comrades. With each knight wearing at least 60 pounds of armor, the walk must have been draining let alone surviving the continuous onslaught of arrows. Knights who fell in the sucking mud could oftentimes not free themselves and drowned.
As the lines finally met, the English archers dropped their bows and attacked with blade and hammer. Being lightly armored, they easily outmaneuvered the cumbersome knights. With more of the French forces pushing in from behind, the press of bodies became so thick that only the first two ranks could fight effectively with their weapons thus negating the numbers advantage. The battle soon turned to a route. 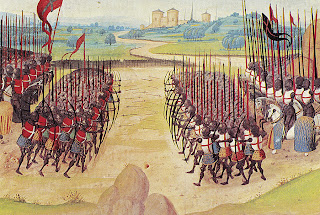 (Image in the public domain)
Results:
The French suffered between 6,000 and 10,000 casualties while the English numbered somewhere around 700. Even worse for the French was the capture of hundreds of noblemen who had to be ransomed. The kingdom lost three dukes, eight counts and an archbishop. The flower of French civalry was destroyed. Five years later, Henry V was recognized as heir to the French throne.

Though the English won the battle and the throne, Henry's sudden death left his sixth month old son in a perilous position. Nowhere near the capabilities of his father, Henry VI proved to be ineffective in maintaining his kingdom as England spiraled into the Wars of the Roses. With the destruction of English forces at the Battle of Castillon in 1453, all English claims and territories in France (minus Calais) were lost. The Hundred Years war was over and it was the French who were victorious.
Posted by Michael at 06:28